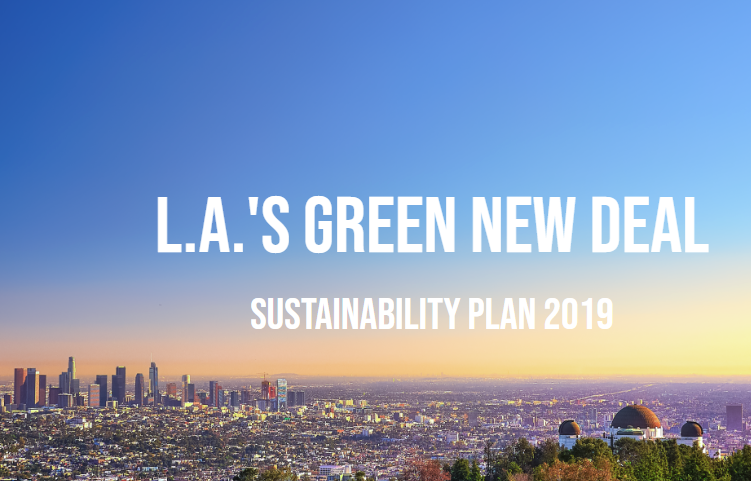 Mayor Eric Garcetti released on April 30, 2019 Los Angeles’ Green New Deal, which sets aggressive goals for the city’s sustainable future, tackles the climate emergency with accelerated targets, strengthens our economy and our middle class, and sets L.A. on course to be carbon neutral by 2050.

“Politicians in Washington don’t have to look across the aisle in Congress to know what a Green New Deal is — they can look across the country, to Los Angeles,” said Mayor Eric Garcetti. “With flames on our hillsides and floods in our streets, cities cannot wait another moment to confront the climate crisis with everything we’ve got. L.A. is leading the charge, with a clear vision for protecting the environment and making our economy work for everyone.”

L.A.’s Green New Deal is guided by four key principles: a commitment to uphold the Paris Climate Agreement; a promise to deliver environmental justice and equity through an inclusive green economy; a plan to ensure every Angeleno has the ability to join the green economy by creating pipelines to good paying, green jobs; and a determination to lead by example within City government, showing the world what an urban Green New Deal looks like in practice.

The Green New Deal leads with bold action to zero out Los Angeles’ main sources of harmful emissions: buildings, transportation, electricity, and trash. Our accelerated goals and new targets include:

The Green New Deal’s targets solidify L.A.’s position as the national leader in solar energy, electric vehicle infrastructure, and green jobs. It incorporates initiatives from 44 partner organizations, employing a unique, collaborative, multi-sector approach to meeting our shared goals of a more sustainable, equitable city. Our plan also calls for a 50% reduction in greenhouse gas emissions by 2025 — outpacing the standards set by the United Nations IPCC report.

Taken together, by 2050, the work and milestones of our Green New Deal are expected to save more than 1,600 lives, 660 trips to the hospital, and $16 billion in avoided healthcare expenses each year.

The City has already met or exceeded 90% of the pLAn’s near-term goals on time or early, and Angelenos have seen the results: L.A. became the number-one solar city in America, pioneered new transportation technologies, reduced the city’s greenhouse gas emissions by 11% in a single year, and created more than 35,000 green jobs.

Here’s a glimpse at some of the other measures and accomplishments that have set Los Angeles on a path to carbon-neutrality by 2050:

For more information, or to download a copy of L.A.’s Green New Deal, visit: plan.lamayor.org