Street Takeovers Are No Party for Southwest LA

Street Takeovers have been a growing concern for the Southwest LA community and the Empowerment Congress has been working actively with the Councilmember Marqueece Harris-Dawson to urgently find solutions. Find out about the problem and solutions discussed at our February 2018 meeting.

Street Takeovers have been a growing concern for the Southwest LA community and the Empowerment Congress has been working actively with Councilmember Marqueece Harris-Dawson to urgently find solutions. At our Southwest NC meeting on February 26, 2018 both the LAPD and Councilmember’s office were on hand to explain the depth of the problem and solutions underway.

The LAPD calls it cruising, but it’s not like the type of cruising where you drive up and down the street to see people. It’s not street racing. It’s really a matter of taking over a street or intersection for the purpose of doing stunts and getting attention on social media. In so doing, they obstruct traffic. They have attacked officers, ambulances, fire engines and people just trying to drive home. In one video, a young man said, “We call this the Sunday Fun Day. We perform dangerous stunts out here and everyone loves it. If we are really lucky, someone will get hit by a mother-[obscenity] car and make our video priceless.”

The street takeovers are usually at night. They often distibute marijuana and perform car, motorcycle, or four wheeler stunts in the intersection, doing donuts and more, often running into members of the crowd and hurting them. Intersections where this has happened can be identified by the burnout circles on the pavement. Interested bystanders are intimidated into not calling the police. Those who the perpetrators don’t like are intentionally run into. Officers showed video footing of one person who had the audacity to call 911. He was then subsequently hit by a car; while he was bleeding from his head, he was pursued and beaten. This is happening all across South Los Angeles every weekend.

When cruisers start to block an intersection to begin a takeover, sometimes drivers will honk in an attempt to get by and the perpetrator will get out of the car and attack the innocent driver. There have been occasions when the Sheriffs came to respond and saw that there were too many attackers in the intersection and left. At one point paramedics were responding to a request to help a 96 year old woman having a heart attack; as they drove through an interesection, they were attacked by a takeover. “When the elderly, and women get dragged out of cars when they are only trying to grocery shop or get home we have a serious threat to the way of life,” exclaimed Southwest NC President Brent Page.

How big is this problem? Just this weekend, on Sunday, February 25 in South LA, our LAPD dealt with 16 takeovers in a five hour period.

We currently have an LAPD task force of six officers in four cars in the South Bureau focused on street takeovers. The perpetrators know they outnumber the officers. At an incident, they have 400 people out there. If LAPD arrests four people at one incident, and it takes an hour or more to complete the arrests, the other 396 are able to go to another intersection.

The solution to takeovers is going to involve the community. Officers urged attendees to recognize these people and turn them in. If you see it happening, call 911 and report a takeover in progress.

In addition to enforcement, we are working with DOT for engineering solutions to prevent street takeovers. We are planning to put in rumble strips at Manchester and Western to make it harder to do donuts.  Rumble strips are currently installed in a pilot program in the valley to address street racing, on a street that only gets 2,000-3,000 cars a day.  They are essentially small bumps in the road. To prevent street racing they put the strips across the lanes making the lane bumpy as cars drive over them.

By comparison to the Valley pilot, Manchester and Western gets 20,000-30,000 cars a day. For this purpose we are going to place them on the lane dividers, putting them between the lanes, so that drivers would only encounter them when changing lanes or doing a donut. By minimizing the number of cars driving over them, we also increase the lifespan of the rumble strips.

Also being considered is how to reduce spectator parking and gathering. Right off Western, behind the Ralphs, there is a little cut, a dead end street, where people can gather. There are plans to block that off. At the Shell Gas Station the plan is to add no loading signs, which will allow the LAPD to cite people when cars gather. Parking restrictions may be increased on the street, so LAPD can cite cars and prevent the gathering in the first place.

LAPD also just met with the City Attorney’s Office to identify citations that apply. The passenger or spectator, can be cited $250 the first time, $500 for the second and $1,000 for every subsequent one. These would be Ace administrative citations, which if not paid, get added to the recipient’s taxes, to increase collectability of citations. The money goes into the city’s general fund.

Also planned is a billboard to inform spectators about the problem and consequences. LAPD is investigating the possibility of confiscating their vehicles, like other cities have done. Some participants have multiple cars with extra tires and air gun in the back for quick change out.

This task force has issued 2,500, citations, made 400 misdemeanor arrests, and 500 impounds with 6 officers. This relentless focus on the problem has brought significant improvement, even with 16 incidents the prior evening. There is less in this area and they are going other places and getting bolder, telling attendees to not leave if the cops show up.

The Southwest Empowerment Congress appreciates the responsiveness of the council office, DOT and LAPD in quickly seeking solutions to make our community safer and we urge everyone to keep an eye out and report any takeovers.

You may watch the livestreamed video of the meeting on Facebook by clicking on the image below. This information is in the first 20 minutes of the video. 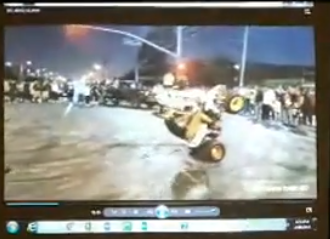